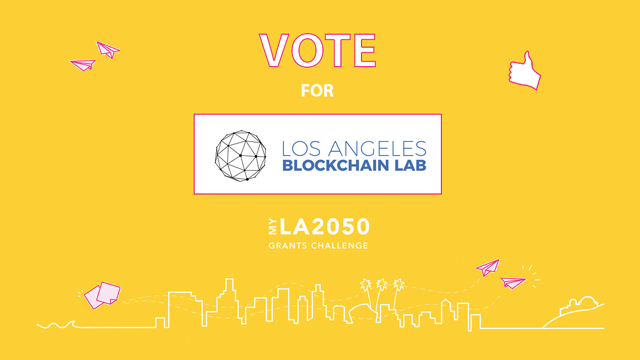 The Los Angeles Blockchain Lab is a finalist for the “My LA2050 Grants Challenge” and they need your support!

LA2050 is a community-guided initiative driving and tracking progress toward a shared vision for the future of Los Angeles. With the support of 30,000 Angelenos, they’ve outlined an aspirational vision centered on five goals and 60+ metrics tracked over time to evaluate how Los Angeles is fairing. The My LA2050 Grants Challenge is an open call for ideas to make LA the best place to learn, create, play, connect, and live.

As a finalist for the challenge, the LA Blockchain Lab is eligible to become one of ten organizations to receive $100,000 and a partnership with LA2050 to support its efforts.

Said LA Blockchain Lab CEO Heidi Pease, ”Because LA leads the country with its best-in-class academic institutions, varying dominant industries, forward thinking government officials, and most diverse cultural backgrounds; we see LA becoming a global blockchain Innovation hub. And with the help of the community and LA2050, we hope to make this dream a reality in the near future.”

To Vote for the LA Blockchain Lab Click Here

Since its founding in the Spring of 2018, the LA Blockchain Lab has been one of the most active organizations in the Los Angeles Blockchain space. Through partnerships with the city of Los Angeles, corporations like Panasonic, and local Universities, they have helped create, launch, and support the:

Their ultimate definition of success is to see LA become a blockchain innovation hub and to create jobs and support growth.

To help them determine success in reaching that goal, they are developing an ecosystem map to monitor the number of students earning blockchain degrees, graduates of coding and jobs skills classes, recruitment and jobs placements, startups, businesses launching blockchain initiatives, blockchain service providers, and blockchain investors.

Winning this grant will allow the Lab to accelerate their efforts and spur Blockchain growth in Los Angeles. Voting closes on Saturday, April 29th, so support them by voting today!

To Vote for the LA Blockchain Lab click here