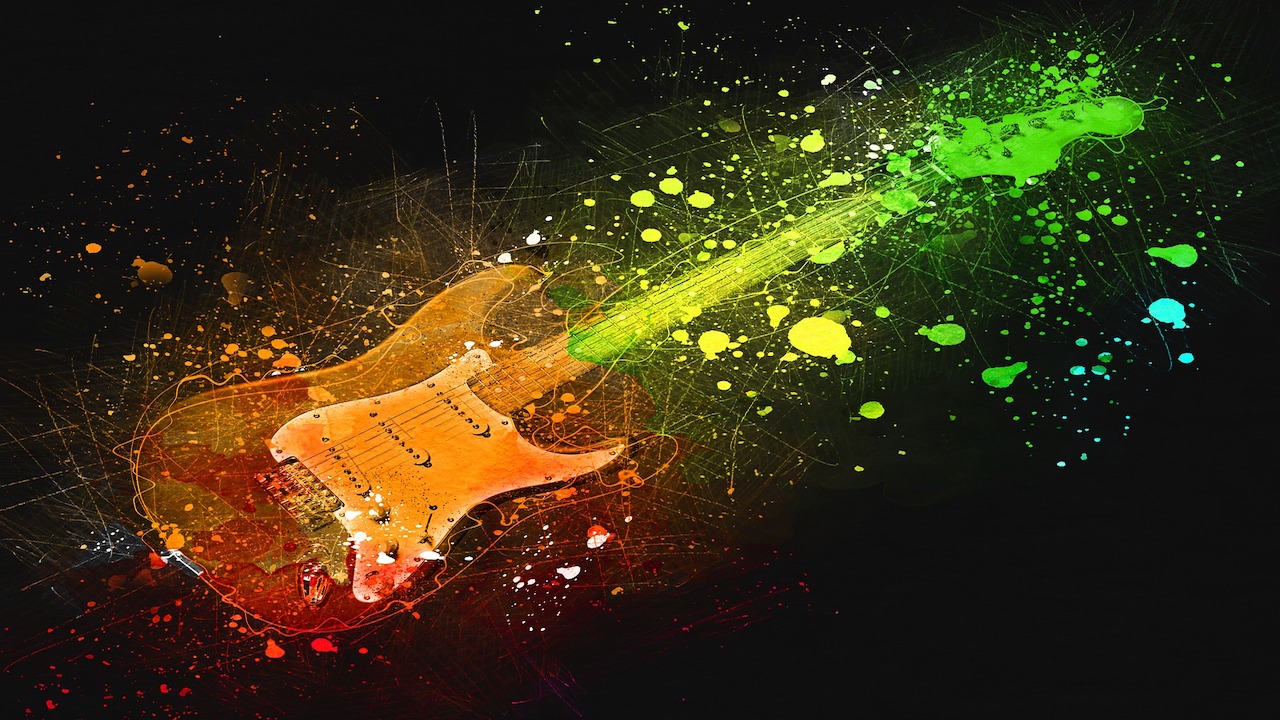 In the expanding ecosystem of the music industry, a longtime problem has become more and more pressing: no central database exists to keep track of music metadata, making it difficult to track down those with ownership or rights and to ensure they get paid. This conundrum isn’t only a disservice to musical artists; other parties suffer deeply from its inequity. Influential music-makers, societies, publishers, and digital music distributors have spent the last decade in conversation, and some action, to bring harmonization to the music industry, and to create uniformity and reciprocity among players with competing interests.

Created in 2008, the Global Repertoire Database (GRD) was one such endeavor, conceived as a “single source of truth” on music works ownership. In 2014, with the funders getting cold feet, the GRD project was shelved, a debt of $13.7 million in its wake. The factors that contributed to the funder withdrawals are oblique and disputed, but one factor was intense fear of one centralized organization having control. Thus the project failed, the original problem unsolved.

Now, a radical solution is on the horizon: blockchain technology could be the music industry’s revenue savior.

Technology has certainly created more ways for music stakeholders not to get paid. But ironically, it’s also most certainly the solution to the rights- management conundrum. The tech sector could swoop in to save the day with a technology that’s already disrupting the nance world and showing up across nearly every other domain: blockchain. Bold organizations across industries are innovating better ways to digitally track ownership of assets—most notably, to date, currency, but the other applications are vast and exciting.

According to Business Insider: “The hundreds of pilots and proofs- of-concept currently in motion are but a tip of the iceberg when it comes to potential applications of the blockchain technology.” 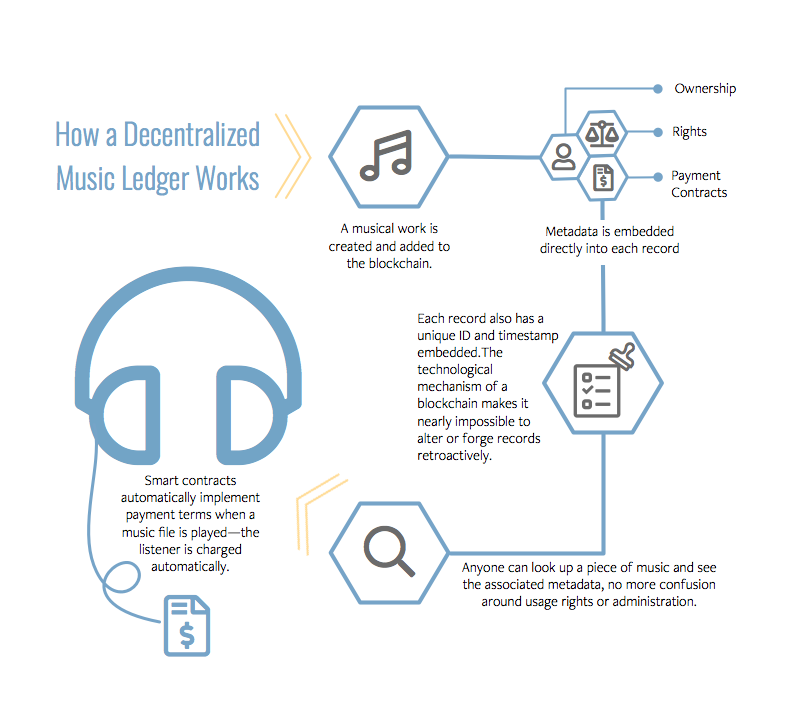 The foundational data structure behind blockchain is a digital transaction ledger dispersed among a distributed network of computers, instead of resting on a single provider. Because there’s no single source of ownership, it’s a radically more secure and, at the same time, transparent type of record-keeping, nearly impossible to alter after the fact.

Open to all. Owned by no one. A permanent record of ownerships anchored to a place and time.

A blockchain solution could succeed in the music industry where the GRD failed: the creation of a decentralized ledger for transparent, efficient, and cost-effective rights management, with embedded metadata that cannot be separated from the music files themselves. Ownership, rights, and payment contracts would be attached to each file, and with full transparency, anyone could search on music les and see that metadata – no more confusion around usage rights and payment administration. As songs are created and encoded, a decentralized global database would roar to life. 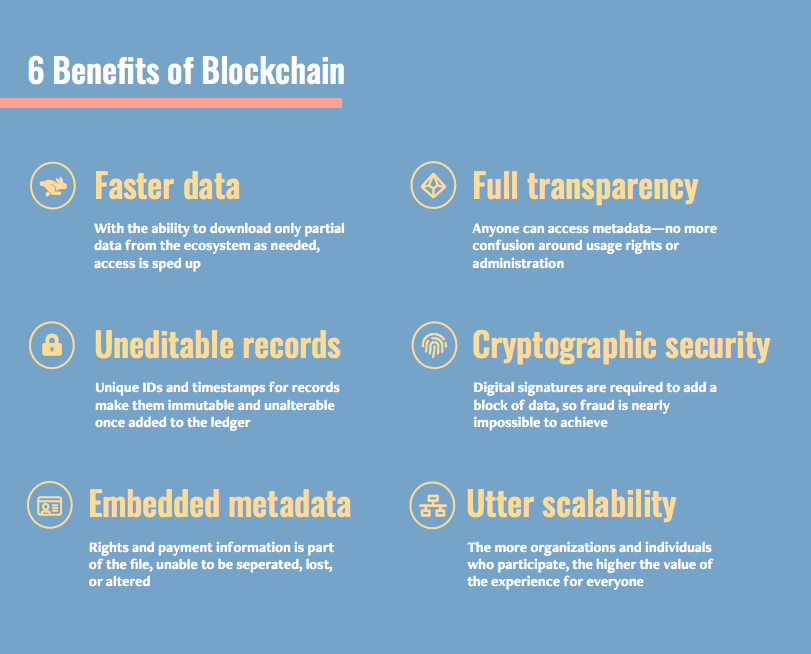 While a Blockchain solution would still have risks associated with change management, data conversion, and regulations, if implemented properly, it could solve the largest issue of centralized power and greatly benefit the music industry.

In fact, if the GRD project were to run all over again, but this time built on blockchain, the outcome would certainly be very different.

The Move to Blockchain Is Picking Up Speed

“While the protocol doesn’t mandate blockchain, we feel that by far the most interesting implementations are blockchain-based.” – Panos Panay, Berklee College of Music

In 2017, Spotify reached a $30 million settlement with a publishing group over unpaid royalties, and as part of that settlement, agreed to put in place a system for the streaming music service that would do a dramatically better job of matching music streams with creators and owners. Subsequently, Spotify announced an acqui-hire of blockchain technology company Mediachain Labs, which created an open source peer-to-peer database for registering, identifying, and tracking creative works online.

The Open Music Initiative (OMI) is a nonprofit comprised of leading academic institutions, music and media industry organizations, creators, technologists, entrepreneurs and policy experts working together to create an open-source protocol for the uniform identification of music rights holders and creators. The goal is to create a protocol of API specifications to enable industry platform interoperability.

PeerTracks, a music startup, envisions an artist-equity trading system platform that leverages the MUSE blockchain, a ledger specifically engineered for the music industry which is promising artists the ability to claim 90% of their sales income (they currently get 15%).

BitTunes is another blockchain startup that addresses digital music piracy with a bitcoin-based peer-to-peer file-sharing platform.

And musician Imogen Heap is creating a new music ecosystem called Mycelia that uses blockchain to enable direct payments for artists and give them more control over the circulation of their songs.

The blockchain movement is picking up speed throughout the music industry, but there’s no one global solution in place… yet. Still, growing interest and serious investment from reputable companies and organizations signal that blockchain is going to be a significant disrupter in the music industry, with real benefits to business. Blockchain has the added advantage of being industry agnostic. Many existing use cases across various industries demonstrate the technology’s robustness and staying power.

This is part one of a three part series. You can read part two on Blockchain Solutions for the Music Industry here.