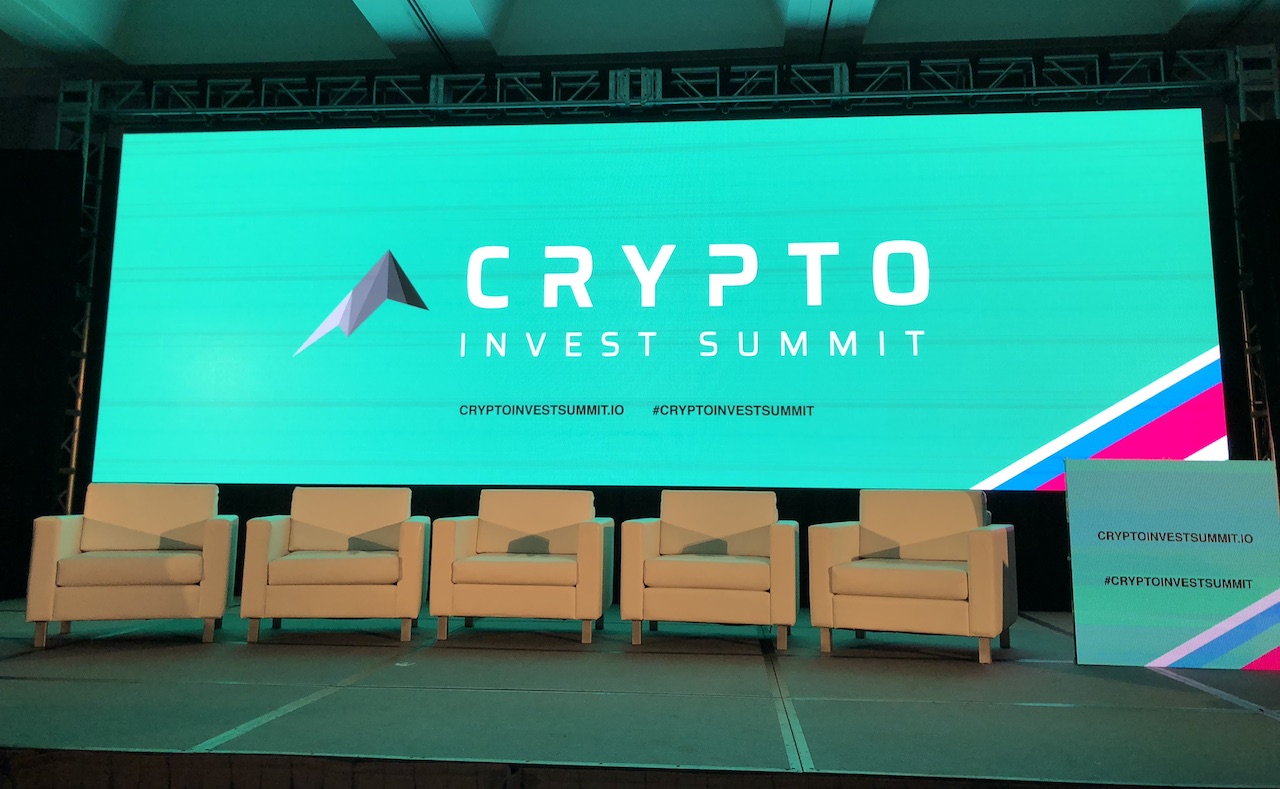 Blockchain Beach attended Day 1 of the largest Crypto event in Los Angeles. Read below for some highlights or you can see the full set of our live tweets here. You can also see our recap of Day 2, with entrepreneurs Crystal Rose and former Olympic Medalists Apolo Ohno.

The opening Keynote came from Hashgraph CEO, Mance Harmon. He had a surprising quote:

The following was a fireside chat with investor Tim Draper and his son Adam (also an investor):

Tim had a lot to say about government regulation:

"Governments are going to be freaking out (about cryptocurrencies). They've controlled us using currency for so long…They need to separate virtual from terristrial." – @TimDraper #CryptoInvestSummit pic.twitter.com/yacsMZnfXz

And the current state of heavily regulated industries:

Adam chimed in with his thoughts about investing in startups and how company structure is not the defining characteristic:

In the first full panel of the day, a number of Blockchain investors weighed in on the state of the industry:

The always interesting Jeremy Gardner, of Augur and Ausum Ventures, questioned the idea of a Crypto “Hedge” Fund:

“How can you call yourself a “hedge” fund when you don’t have the tools to properly hedge… The investments we make @AusumVentures are long term and, if successful, will make the world better in the next ten years” – @Disruptepreneur #CryptoInvestSummit pic.twitter.com/Qrj7CZC4Oh

Moderator of the panel, and one of the Crypto Invest Summit Organizers, Wavemaker Genesis’s Alon Goren gave us perspective on the potential token market:

“There is a 7 Trillion dollar market for alternative investments in the US. It’s not just crowdfunding.” – @AlonGoren pic.twitter.com/ZdAb2CYDxp

And back to Jeremy, don’t ignore both the risks and benefits of Airdrops:

“The Supreme Court ruled that you can’t give away securities for free, so there is precedent there for Airdrops. @coinlist is working on a way to do it with compliance where people would pay a few dollars and get an airdrop worth much more” – @Disruptepreneur #CryptoInvestSummit

“@AbraGlobal is the only live, retail, consumer facing application built on smart contracts for Bitcoin (also @CryptoKitties but they’re on Ethereum). And we set a high bar by actually responding to customer service requests!” – @billbarhydt #CryptoInvestSummit pic.twitter.com/T2zdLkWafx

Abra will allow you to lock in a USD value of your Digital Currency:

“@AbraGlobal can use smart contracts to keep you whole in $. If Bitcoin’s price goes up, you hold less Bitcoin (in the app) and if it goes down, you hold more Bitcoin. We hedge away our counterparty risk on exchanges.” – @billbarhydt #CryptoInvestSummit

And in some countries, you can exchange funds and not get taxed using their system (not in the US, sorry):

To question asked about Taxes on @AbraGlobal smart contract transactions by Blockchain Beach:

“It’s country specific. In the US, it’s taxable under commodity law, but in the UK, it’s not taxable due to their gambling regulations” – @billbarhydt #CryptoInvestSummit

There has been a lot of talk about whether there should be “Women in Blockchain” panels versus just having more women during other panels. However, we still saw a world class group of women today:

Tavonia may have created Guapcoin for the African American community, but that doesn’t mean Blockchain is for everyone:

“I work with a lot of accelerators and I’m the one telling companies not to use Blockchain most of the time. If you’re ONLY implementing Blockchain to get ICO funding (because you can’t get funding elsewhere), it’s probably not a good idea.” – @cryptodeeva #CryptoInvestSummit

But it is for some:

And in case you still think you’ve missed the boat, you haven’t:

“I have seen some examples that show a true utility function, but a lot are securities… Blockchain technology could open up more than five times the current market.” – @saraborazan #CryptoInvestSummit pic.twitter.com/Tg8tJ2Z6oB

The Beyond the ICO Hype panel had a timeline of US Regulatory Action. Recent quotes from SEC Chairman Clayton don’t sound as scary as his previous ones:

The most fiery panel of the day came from a panel of Crypto Investors, plus one entrepreneur (guess who had the most exciting quotes):

As one of the investors used soundbites to preach regulatory caution, David Bleznak shot back with passion:

“Let the markets speak! Trusted protocols are the free market. People will trust what works. I don’t think Satoshi Nakamoto was saying we need a Reg A and a Reg D” – @bleznak #CryptoInvestSummit

“There is only one clearing house in the US and NASDAQ created that entity. Now they want to get into digital currency exchange? That’s a joke!” – @bleznak @totlecrypto #CryptoInvestSummit

To end the day, we got to hear about the Asian Markets and their impact:

For long time investors, a difficult shift in mindset is necessary to think about this new asset class:

“Are we in a golden age of R&D? If income isn’t the only driver of value, what is? Maybe it can be something else” – @nixnolledo #CryptoInvestSummit

“People are using transactions per second to diss Satoshi Nakamoto. If you want fast, you can use Oracle. It’s all just a slider for the amount of trust: from trusting nobody to trusting one centralized organization. Bitcoin isn’t a database.” – @mikojava #CryptoInvestSummit

You can also see our recap of Day 2, with entrepreneurs Crystal Rose and former Olympic Medalists Apolo Ohno.