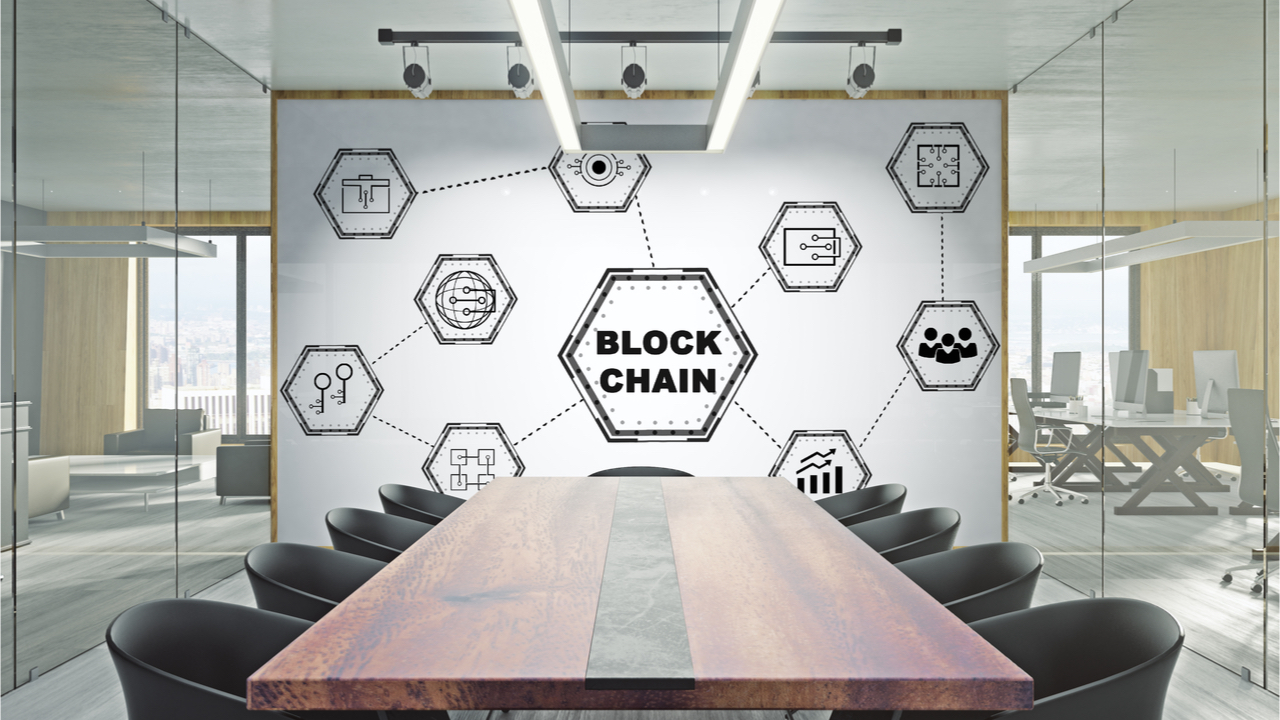 For Part 1 of this article and an introduction to enterprise Blockchains, follow this link.

A blockchain is actually a special kind of technology called distributed ledger technology (DLT). The primary idea behind DLT is that data is stored within a distributed ledger or what can be thought of as a distributed database. In a blockchain, the data in the ledger is entered as blocks of data. These blocks are linked together by storing some hashed data from the preceding block in the header of each subsequent block. In this way the data is stored as a linked chain of blocks, or a blockchain.

Key platforms for enterprises include:

It is important to note that not all the enterprise solutions covered in this section are blockchains. The table below provides a comparison across these systems of key parameters: 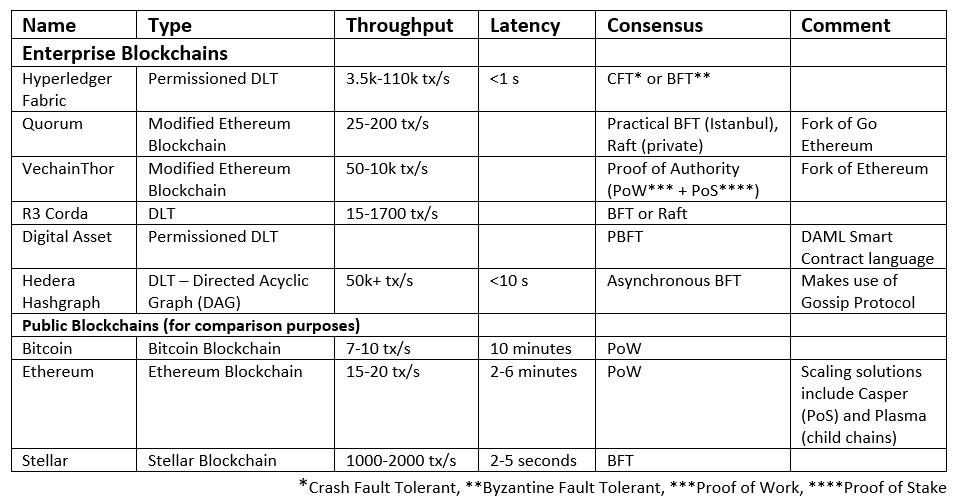 As can be seen, enterprise blockchains typically have much higher throughput, lower latency, and often less complex consensus protocols than standard public blockchains like Bitcoin or Ethereum.

Shared elements of the enterprise blockchain platforms include:

The sections that follow provide more details about each platform.

Hyperledger Fabric is a distributed ledger technology (DLT) that was developed by IBM and Digital Asset. The source code was open sourced and donated to the Linux Foundation which maintains it under the Hyperledger Project. Fabric is a modular platform that allows customization and utilizes permissioned blockchain technology to build private business networks.

Fabric provides a framework that includes:

An overview of the architecture is shown in the graphic below: 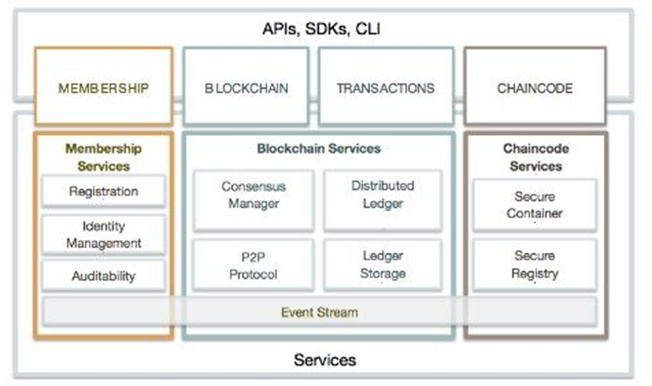 Standard blockchain solutions use an Order-Execute paradigm whereby transactions can only proceed once a consensus mechanism has verified their order within a block and then agreed that the transactions are valid. As Fabric is typically deployed in a trusted environment (i.e. within a company, group of companies, or a consortium), the design has been changed to Execute-Order-Validate whereby transactions can proceed before consensus is reached. Following execution, consensus is used to order the transactions, validate them, and then write them to the ledger.

Fabric creates a high-performance environment by combining a number of different capabilities. First, transactions can execute before consensus which leads to a lower delay. Next, consensus is pluggable and can use faster Crash Fault Tolerant (CFT) or a range of Byzantine Fault Tolerant (BFT) protocols. Also, consensus only relies on a subset of nodes, which enables parallel processing. Finally, sets of transactions for a given smart contract do not need to be executed in a specific order.

The primary mechanism for privacy and permissioning is the creation of sub-channels. These sub-channels enable groups within a specific network to specify rules for transactions that are not seen by other members of the same network. So, for example, partners within a network might want to keep specific transactions with their customers confidential so that others within the network do not have access to pricing, business logic, or transaction frequency data.

Sub-channels are very useful and can enable a high-level of customization; however, feedback from the field has indicated that setup time for each sub-channel is very tedious and time-consuming and that many sub-channels are generally required for each partner. As a result, deployment times for Fabric can be long and implementations can be very expensive.

Key use cases can include reconciliation, settlement (especially cross-border), and payment within distributed environments such as in banking/finance, supply chains, and shipping. One example is given below:

Key pilot customers include (most of these are with IBM):

Though not covered here there are other versions of Hyperledger including Sawtooth (from Intel), Indy (from Sovrin Foundation), Burrow (uses the Ethereum Virtual Machine for smart contracts and cryptocurrency), and Iroha (developed by a mobile-centric team based in Japan). Each of these projects has a different focus and implementation. I have focused on Fabric because it is the most developed and has the most deployments.

Quorum is a permissioned blockchain platform that was developed specifically for enterprise use cases. It is a fork of Go Ethereum that was created by JP Morgan, the major bank based in New York City. Since it is based on Ethereum it uses many of the elements of the well-known public blockchain platform.

The primary modifications to Ethereum include:

Even though it is based on Ethereum, both transactions and smart contracts can be made private in Quorum. As with Hyperledger Fabric (above) this enables competing entities to work together without sharing their customer data (ledger information) or business logic/terms (smart contract implementations).

An example of this processing is shown below:

Since Quorum operates in a trusted node environment, it can use a simpler consensus protocol than Ethereum which results in lower latency and faster transaction processing times (dozens to hundreds of transactions per second) when compared to Ethereum mainnet. At the same time, all upgrades to Ethereum are built in and so Quorum has the advantage of leveraging the very dynamic Ethereum developer ecosystem.

VechainThor is a permissioned enterprise blockchain platform that was initially created for supply chain management. Because of its supply chain focus, VeChainThor is also manufacturing RFID and NFC chips that can be used to track products through a supply chain. These chips will hold a private key and public key pair and will also measure and store environmental conditions such as temperature and humidity. The public key of the chip as well as a hash of the data will be stored on the blockchain. The actual data will be stored in a decentralized data store known as CHAOS.

Though VechainThor was initially focused on supply chain management, it has broadened its applicability to work with many other enterprise scenarios. Other use cases include product authenticity and provenance, product certification, logistics, real-time monitoring, and digital passports.

VechainThor is a fork of Ethereum that uses solidity smart contracts, the Ethereum Virtual Machine (EVM), and the Ethereum data store. Unlike most other platforms reviewed in this section, it does employ cryptocurrency in its solution and has 2 tokens. One token, VechainThor (VET), is an ERC-20 token that is actively traded on many cryptocurrency exchanges. A second token, Thor Power, is used internally to the platform to pay for all transaction fees and smart contract execution fees. To minimize volatility, Thor Power is set up as a stable coin that will use a burn and mint equilibrium model to minimize price variation.

The consensus nodes are known as Authority Nodes or Thrudheim Masternodes. These nodes are limited to 101 in total and have the highest level of Thor Power generation. They are permissioned by the foundation and require a commitment of 250k VET (approximately $1M at current prices).

VechainThor has many of the key features already highlighted by the other platforms (above) for a corporate environment, these include:

An overview of the architecture is shown below: 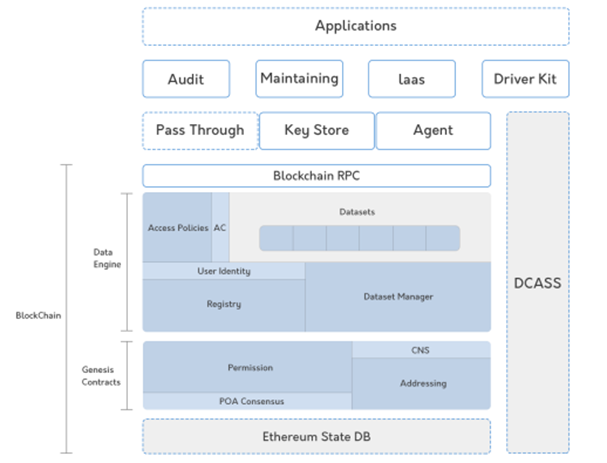 Interestingly, it is also a closed source project in which the Foundation controls the code which means that hard forks by a developer community are not possible.

There are two lesser known public blockchains that are competitive with VechainThor. These are:

WaltonChain: WaltonChain is similar to VeChainThor in that it has been optimized for supply chain management. The name of the blockchain is derived from the inventor of RFID, Charlie Walton. Like VeChainThor, WaltonChain uses proprietary RFID chips, is based on the Ethereum blockchain, uses an ERC-20 exchange token (WTC), and is headquartered in China. WaltonChain is partnered with Alibaba in the IoT Connectivity Alliance and has a number of large Chinese and European companies using its products.

OriginTrail: OriginTrail is a Slovenian company that originally developed its decentralized supply chain management platform for the food industry. It has pilot deployments in Europe, China, and the US. OriginTrail uses its Trace token and can aggregate data across multiple blockchains including Ethereum, IOTA, Hyperledger, and NEO. Rather than using proprietary RFID tags the platform synchronizes the supply chain by pulling data out of the ERP systems of the suppliers.

R3 is an alliance of 200 financial institutions that has developed a private and permissioned DLT named Corda specifically for financial transactions. Unlike most blockchain technologies, Corda transactions are recorded in a SQL database that is more easily searchable than a blockchain ledger.

Unique features of Corda include: Ricardian smart contracts that include legal prose as well as code, smart contracts are written in Java or Kotlin (variant of Scala), each node writes data to a vault that tracks all data in UTXO format (like Bitcoin), and consensus is carried out by notaries that check for both validity and uniqueness.

An overview of the node architecture is shown below: 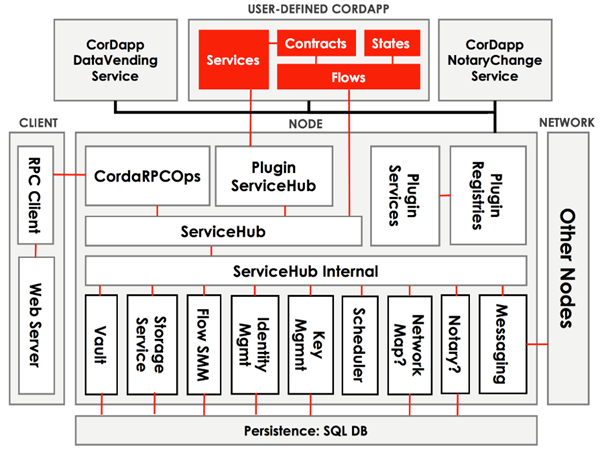 Key pilot and deployment customers include:

Digital Asset is another permissioned DLT specifically designed for financial applications. The platform allows for the development of a distributed database that enables participants to synchronize information about transactions within the network while keeping details of the transactions private. An overview of this structure is shown in the diagram below. 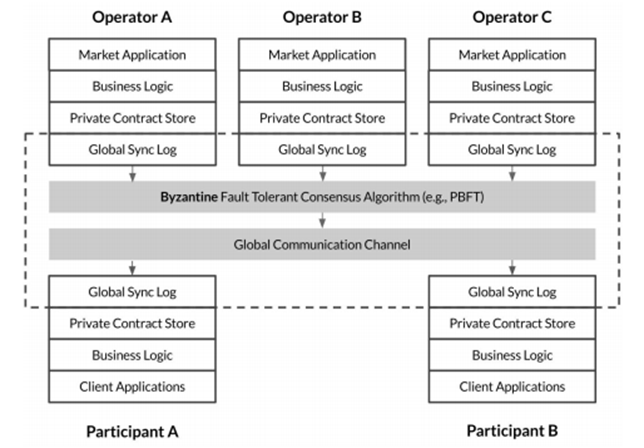 An important part of the Digital Asset platform is its Digital Asset Modeling Language (DAML). This is a specialist language for financial industry smart contract development that enables business analysts, rather than developers, to create the smart contracts for the system. These smart contracts run permissioned and private so that only the parties involved in the transaction carry out consensus.

Hedera Hashgraph, developed by Swirlds, is a DLT that can be configured to be either public or private and permissioned. The public version is free of charge while the private/permissioned version is provided under a paid license.
The platform contains a number of novel features including:

Hedera Hashgraph uses solidity smart contracts (those used in Ethereum) and so is able to tap into the broader community of smart contract developers. The platform architecture is shown below: 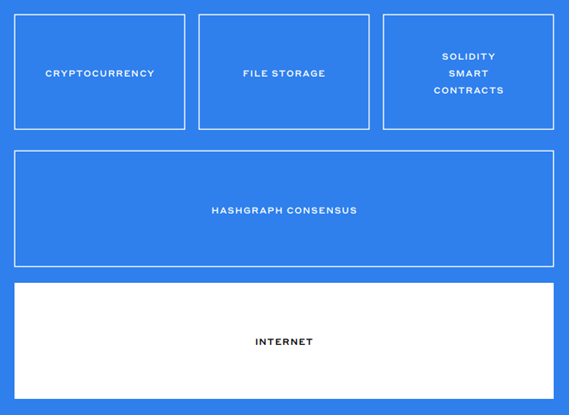 One of the major customers for Hedera Hashgraph is a consortium of 13 credit unions known as CULedger. This consortium is building a DLT solution for cross-border payments. Other customers include Machine Zone (a large video games developer), Satori, Invita Health, and Artbit.

Enterprise blockchain is a quiet revolution. There are thousands of projects and hundreds of enterprises evaluating and deploying blockchain solutions today. The platforms are ready, the specifications are clear, and the projects are primed for launch. I see this area as the largest opportunity for growth, investment and value creation in the blockchain space over the next few years.