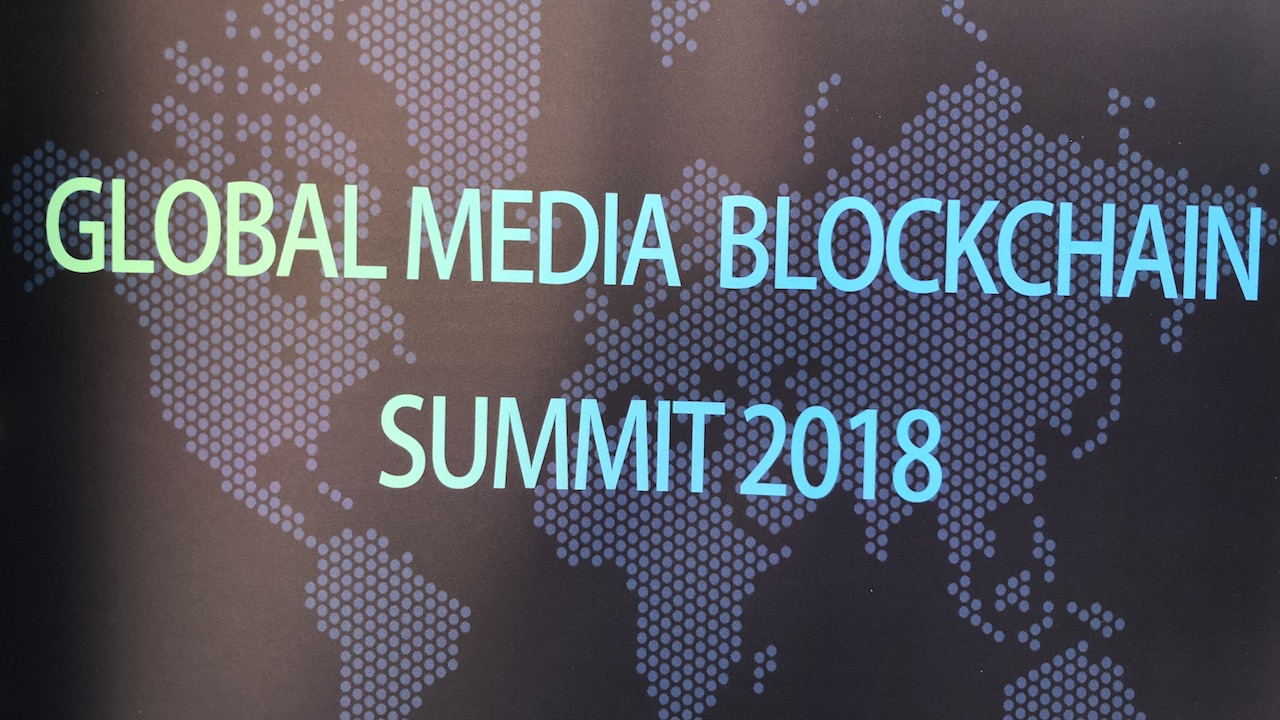 Presented by the LA Blockchain Lab and IDEAS, UCLA Anderson’s Korn Convocation Hall hosted the Global Media Blockchain Summit. The two-day event featured influential speakers from around the world with attendees that mirrored the global diversity. Here is a recap of Day One and follow us on Twitter for updates from Sunday’s sessions.

The morning kicked off with a welcome keynote from California State Senator Robert Hertzberg:

He is pushing California for forward looking Blockchain regulation because he sees a solution to the income inequality problem that is affecting the US:

“Capital grows at a high rate, work grows at a low rate. You need to harmonize the growth of capital with the growth of work. Otherwise, the rich/poor divide will tear the world apart. Tokenization can solve it. What does Mark Zuckerberg need with $100B?” – @SenateHertzberg #g25t

Next, Investor Andrew Gu from DHVC talked about what it is like having a $600M investment fund focusing on Blockchain:

He had some direct advice for the students in the audience and made it clear that, even as an investor, he’s still a Stanford technologist at heart:

“If learning about how Blockchains are structured doesn’t excite you, you should probably quit your Computer Science major” – Andrew Gu, DHVC #g25t

A practice that may be common at conferences in Asia, it was pretty wild to listen to a translator via a headset. For some panels, we even had multiple languages within the same panel and had to remove and replace the headset from speaker to speaker!

The morning ended with a panel on media’s influence on Blockchain development:

Cointime’s Ray Zhang discussed a persistent problem in determining the value of projects:

“Media is not doing a great job, but it’s not totally their fault. There is no regulation or framework to determine what is a shitcoin. If the market is down, but I’m working hard on my project, am I a shitcoin?” – R. Zheng @cointimeus

Lino Network’s Wilson Wei dispelled the myth that PR and Marketing are the signs of a good project:

“There are a number of good projects that don’t focus on PR or Media exposure.” – W. Wei @Lino_Network #g25t

And David Zhang made a call for governments around the work to make an example of the real scammers:

"Stop calling the scammers "innovators." I call for the governments of the world to arrest the scammers. Media can work with governments to make that happen. The US is making steps, but in China it seems like scammers are ok." – D. Zhang, Shunya Group #g25t

After lunch, we were joined by David Moss, formerly of Block.one (developers of EOS) and currently the CEO of StrongBlock:

Back from lunch with David Moss, CEO StrongBlock speaking on EOS: Launch and Beyond #g25t @LABlockchainLab pic.twitter.com/NMCSk1NgIW

He lead us through an interactive demo of what it means to be an EOS Block Producer:

And finally teased us with a general idea of what StrongBlock will be upon launch:

David Moss teases StrongBlock by saying EOS will be a 787 and StrongBlock will be "a custom 787 factory." He's already brought on five former Block One employees. #g25t pic.twitter.com/MNYPHj3cL6

Paul Veradittaki of Pantera Capital had concerns with the regulatory environment:

"Because of (regulatory issues), a lot of companies, ICOs, and investors have become more conservative… We also need companies to launch products that are actually be used." – @veradittakit @PanteraCapital #g25t

"Offerings that have proper token economics, a community, and an agenda that brings that community together will absolutely survive." – @tomlombardi @ThisIsDNA #g25t

Phillip Liu, COO of Bitmain, was asked about how mining affects the price of Bitcoin:

"I don't see much correlation between the cost of mining and the price of Bitcoin" – P. Liu @BITMAINtech #g25t

And how he thinks that they energy usage problem in Bitcoin will play out:

"Mining is the most far and effective way. There are energy costs to other activities as well. We've made lighting more efficient with LED lights and mining will have similar innovation. Humans are smart like that." – P. Liu @BITMAINtech #g25t

Finally, all four panelists weighed in on where they think prices are going this year:

"I see one coin, Bitcoin going up in value, but not most other coins." – P. Moynihan @BCII_Ind

"As far as price goes, Q4 could be interesting to watch." – @veradittakit @PanteraCapital

"There is movement in currency pairs. When Brexit happened, it lead to a lot of interest in Bitcoin." – @tomlombardi @ThisIsDNA #g25t

Next up was a panel on gaming and content:

“Content is King, but it’s a Game of Thrones and Winter has come in the form of Netflix and other tech companies. Hollywood must adopt Blockchain to take back prominence from centralized players.” – @TEDDYZEE #g25t

And Wax’s William Quigley chimed in as well:

“If you’re thinking of building a Blockchain for Hollywood, don’t bother. What you’re hearing today is there’s no money there (they’re not ready to do it). If you are building something, focus on scalability.” – @quigleyreport @wax_io #g25t

We closed out the day with a fireside East meets West chat:

“We haven’t had the opportunity yet to collaborate deeply with Chinese partners…but I’m excited about the opportunities….people need to build (dApps)” –@samenglebardt Co-founder and Head of Strategic Partnerships, Galaxy Digital #g25t #vc #VentureCapital #DApps #EOS pic.twitter.com/cwFK4SgHBN

Overall, this conference showcased a diverse range of voices in the US and Asian Blockchain communities. We’re looking forward to seeing day two pick up where day one left off.