When you pay $4.56 million for lunch with someone, every minute counts. A lot.

Justin Sun, the 28-year-old CEO of Tron and BitTorrent, won the charity auction bid for lunch with legendary investor Warren Buffett, the billionaire CEO and chairman of Berkshire Hathaway.

Sun recently told Yahoo Finance that he aims for the lunch “to be a bridge between the cryptocurrency community and the traditional investor.”

Sun is not the right messenger.

Buffet has made a career avoiding the hype and investing in fundamentals. Sun has made his name off of building hype. 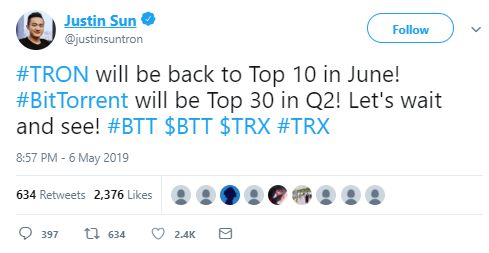 For Buffett to take this meeting, it proves how charitable he is.

The reason why blockchain is misunderstood by so many people is that there’s a low signal-to-noise ratio. People like Sun contribute to the noise.

When you strip away the hype, this is what is most important for savvy investors like Buffett to understand about blockchain.

It’s important to acknowledge Buffett’s skepticism of cryptocurrency. He considers crypto to be a gambling device rather than an investment. Charlie Munger, vice chairman of Berkshire Hathaway, shares those sentiments.

Their viewpoint is consistent with many skeptics, so there’s nothing really new here.

What’s interesting, though, is that Buffett realizes the power of blockchain technology while at the same time disregarding cryptocurrency. This is a standard mindset of people who see value in a decentralized system that enables people to directly transact with each other in a transparent manner – yet they do not understand the role that cryptocurrency plays in the process.

Why Cryptocurrency is Critical to Blockchain

For any public blockchain to have value, the cryptocurrency that underpins it must also be valuable.

The entire purpose of blockchain is to get people to agree on (and trust) a transaction between independent parties without a “trusted” 3rd party to verify it. The work required to verify these decentralized, peer-to-peer transactions must be rewarded, and cryptocurrency is the currency. Think of it as the reward mechanism for playing fairly.

Cryptocurrency mining, therefore, is simply the process in which transactions for various forms of cryptocurrency are verified and added to the blockchain digital ledger.

Without cryptocurrency, public blockchains would cease to function because nothing would be at stake. There would be no enforcement mechanism.

So these are two components that work in tandem.

Meanwhile, it’s true that private blockchains do not require cryptocurrency to function, but what is even the point of a private blockchain? It’s the equivalent of an extremely expensive database, and since it’s centralized, it defeats the purpose of blockchain technology.

The true innovation of blockchain is that it’s a decentralized system for measuring transactions and ownership. It allows for a transparent and digital chain of custody between third parties without a single controlling owner.

What Buffett subscribes to is “value investing,” which is the process of evaluating companies based on careful analysis of their income statements, cash flows, and balance sheets, and then buying stocks and companies that are undervalued.

This is a long-followed approach advocated originally by Benjamin Graham in his book, “The Intelligent Investor,” published in 1949.

What this method does not account for are companies that utilize networks and network effects to accumulate value, while burning through cash at the expense of EBITDA. In consumer tech (i.e. Netflix, YouTube, Facebook, Snapchat, Twitter, Uber, Lyft, Spotify), many companies’ market caps are seemingly disconnected from their profitability. It’s because they’re playing a different game. In a land grab to build a network (which at scale has a tremendous moat), traditional business metrics take a backseat to user growth that spurs network effects.

The tenets of value investing do not jive with this dynamic.

So what does Buffett’s skepticism of cryptocurrency have to do with networks?

Our hypothesis is that if Buffett better understood the relationship between blockchain and cryptocurrency AND his investment thesis were broader to account for companies who are building value through their networks, he would turn from a crypto skeptic into an evangelist.

Right now, these aforementioned companies are building billions of dollars in equity by leveraging their network effects at the expense of the people doing the work. In the case of media, content creators are being squeezed (or will eventually be squeezed) by all-powerful digital platforms.

A public blockchain utilizing cryptocurrency is a better way to transfer value in networks so that all stakeholders are aligned.

Martin Floreani is the founder and CEO of Rokfin. He focuses on delivering a product that creates the world's most efficient content network. He previously founded FloSports, a leading subscription-based sports media company. He ran the company for 12+ years as its CEO, and raised more than $40MM in funding through a combination of debt and equity rounds. After leaving FloSports, Martin reflected on the media landscape and noted the glaring inefficiencies that exist in how content creators, consumers, and digital platforms interact. In particular, he recognized the value being stripped away from content creators by digital platforms. He knew there was a better way to capture this value utilizing blockchain technology. With that, Rokfin, as we now know it, was born.

Crypto Lending: Too good to be true? (Part 2)
A Bullish Blockchain Investment Thesis for 2019
Advertisement