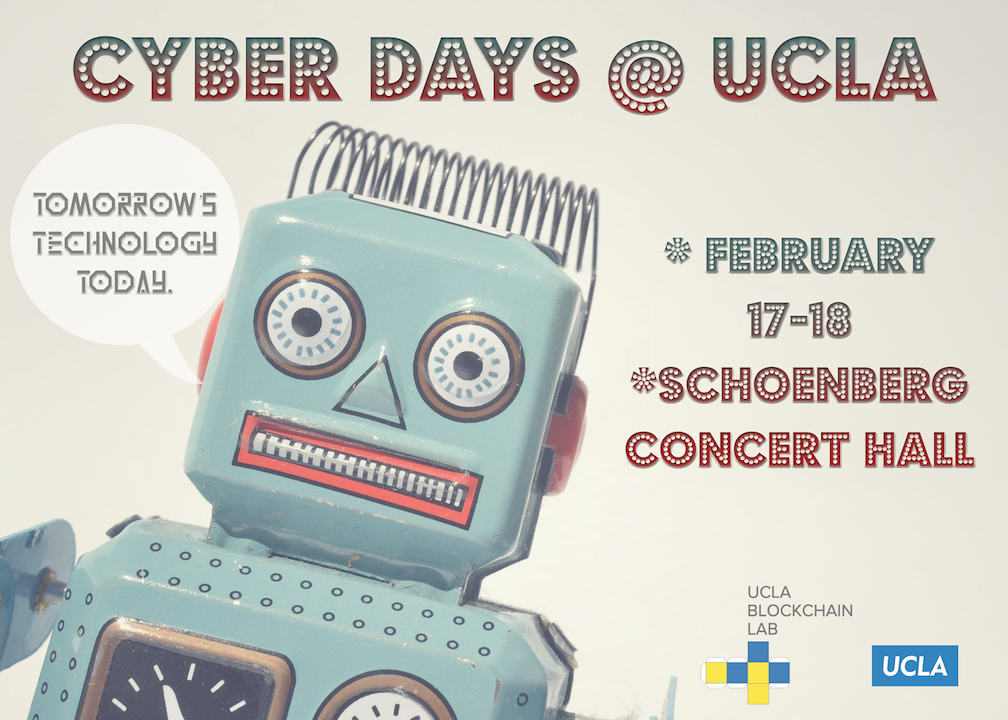 The inaugural UCLA Cyber Days Conference continued on February 18th. The organizers from the UCLA Blockchain Lab and the DApper Network continued their strong showing from Day 1 with another round of great panels for Day 2.

Blockchain Beach attended and live tweeted the event. You can see the full series of tweets here. We also published a separate article about the announcements from a Fireside Chat with Tezos Co-Founder Kathleen Breitman that can be found here.

“I read the Bitcoin whitepaper over and over until I had that moment where I got that it could destroy banking and change everything.” – @srolondon #cyberdays

Blockchain, the Next Disruptor for the Music Industry

“It’s a little early for a rocker, but now that I’m in tech, I gotta get weird and work on Sundays” – @mattsorum @gunsnroses @artbitapp #cyberdays

“I’m constantly fielding emails about clearing songs where nobody has any idea who the rights holders are. Everyone loses money when that song can’t be cleared.” – @MR_George @SB_Projects #cyberdays

From the Developer POV

“We hire a lot (of Blockchain developers) from Brazil” – @therevlotingx @kr8osproject

“We’ve had success (hiring from) down in Argentina” – @GoBloqSteve #cyberdays

“There could be a kid who “eats Solidity for breakfast” who ends up owning your smart contract if you build Turing complete contract (on Ethereum). They have to be battle tested because even the father of Solidity has had broken contracts” – Jeff McDonald @NEMofficial #cyberdays

Government Adoption of Blockchain Around the World

“The notion is this: the world is changing at a breakneck speed. We’re creating a divide economically and technologically when the economy and the government are not aligned. Most of my colleagues think Blockchain is a fence around a swimming pool” – @hertzieLA #cyberdays

“Identity, Money, Marketplace, Reputation — those are the four component parts that successful marketplaces have. But you don’t take your reputation from Uber over to Lyft, Amazon over to eBay. You can with Blockchain” – @BrianForde #cyberdays

The Unique Position of a SoCal Blockchain Entrepreneur

“We have offices around the country, but things are different in LA. People want to do their Blockchain work here, especially with how the Universities have embraced it.” – @rhanisco #cyberdays

“For the first time, we have tech and money in LA (remember Snapchat had to raise from SF). This should allow LA’s Blockchain Tech to surpass that of SF or NY.” @mahbodmoghadam @Everipedia #cyberdays

How is Blockchain helping women?

“In Dubai, women are putting their degrees and art on the Blockchain” – @rahilla

“The barrier to entry is low. If you’re willing to put in work, code doesn’t lie” – @UhOhSusan

With so many Blockchain Conferences to choose from each year, make sure to put UCLA Cyber Days on your list for 2019.