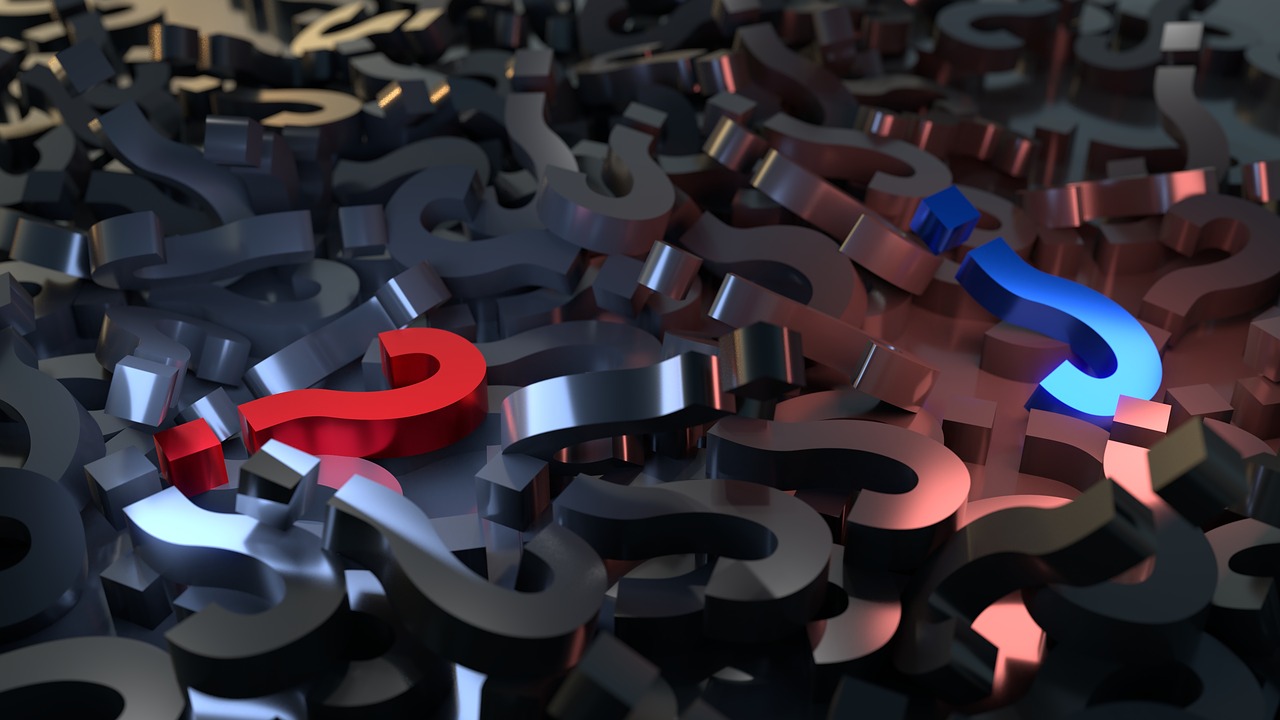 This is Part Three of a Three part series. To read Part One, an intro to Decentralized Voting, click here or Part Two on Voting Trends, click here.

Below are a couple exciting implementations.

As currently outlined on GitHub, Polkadot’s governance introduces the notion of an on-chain “Council”, comprised of a fixed number of Polkadot stakeholders (envisioned to be 12-24). Each council member is elected through a staggered community Approval Vote (similar to upvoting), with members participating in a representative democracy and continuously rotating as their election term expires (1 member rotates per month). 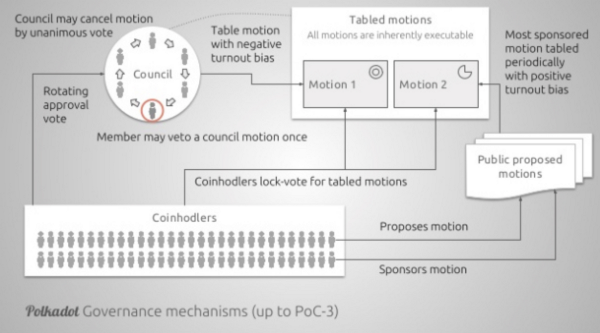 The general idea behind Adaptive Quorum Biasing is that if the Council proposes a vote, and there’s low turnout, then the proposal in question requires a lot more No votes over Yes votes to reject the Referenda in question. However, in the same low voter turnout scenario, if a regular token holder proposes a vote, the proposal needs significantly more Yes votes than No votes. 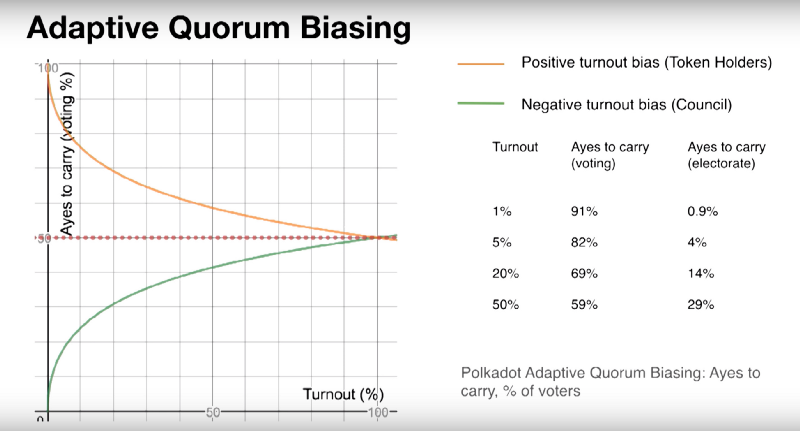 Adaptive Quorum Biasing provides Polkadot flexibility in low voter scenarios by basing voting majority requirements on turnout, making it easier or more difficult for a proposal to pass if there is no clear majority of voting power for or against it.

In addition to the introduction of a council, Polkadot leverages weighted voting, based on two variables: tokens and time.

The number of tokens are multiplied by the designated time lock to calculate the total number of votes. Weighted voting creates an interesting dynamic whereby passionate voters are able to make their votes count more by increasing their exposure to a decision.

For example, a miner may be willing to take more risk and voluntarily lock their tokens for the maximum amount of time when voting for a Referenda around a change to their bottom line. If the Referenda passes, the miner’s tokens are locked and they face the economic implications of their decision by losing the ability to sell / exit the system until their tokens are unlocked. If the Referenda does not pass, the miner’s tokens are not locked and they can sell or exit the system if they feel strongly enough. 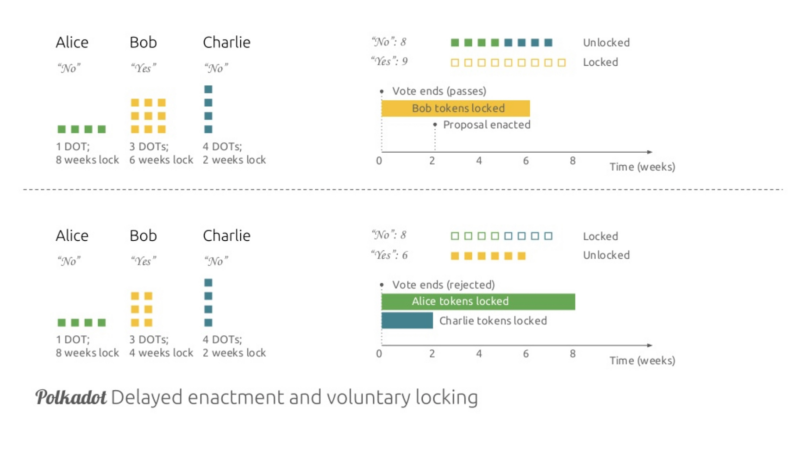 This is an oversimplification of Polkadot governance process, so I urge the curious to read more on GitHub or watch Ryan Zurrer’s presentation at AraCon 2019.

DFINITY directly addresses the shortfalls associated with the average user lacking direct subject matter expertise as previously discussed with the design of their Blockchain Nervous System (BNS), a form of Delegative Democracy:

“BNS is an intelligent system that will accept proposals from different stakeholders and then decides on these proposals using votes made by human-controlled neurons. Every, interaction with the neuron is a learning experience for the BNS and it will continuously learn and adapt to make better decisions. Note that the proposals may concern different matters such as Economics, Policy, Protocol Upgrades, Client Upgrades, Fixup or Freeze Resident etc but ultimately the system will follow a democratic voting process and decision making.”

Neuron’s within the BNS are created via a time-locked security deposit of DFINITY’s native token, DFN. The relative voting power of a Neuron is proportional to the size of total deposits. Similar to Polkadot, if a voter wants to retrieve their deposited DFN, they must “dissolve” their deposit over a significant time period (3 months or longer as outlined in initial BNS designs), creating a strong incentive for Neurons to contribute to net-positive decisions as the value of their locked DFN could fall otherwise.

In addition, DFINITY incentives voter participation by rewarding Neurons with DFN whenever they vote, with rewards being calculated proportional to the size of the Neuron security deposit and the percentage of decisions they participate in.

While there is a clear incentive to participate in every vote, with potentially dangerous repercussions associated with blindly voting, DFINITY allows Neuron’s to follow the votes of other Neurons. By establishing Neuron follower relationships with trusted subject matter experts on relevant proposals, voters are able to delegate their decisions to perceived authorities.

For example, one can program their Neuron to follow a number of Core Developers for protocol-level proposals, or a group of Researchers they align with philosophically. This type of “liquid democracy” allows tokenholders to actively participate in on-chain votes for specific proposals they may not have the expertise to vote on.

The amount of experimentation and innovation happening in this space is exciting and provides hope that the barriers associated with low voter turnout will be solved. As a majority of the novel on-chain governance designs are unproven and purely academic at this point in time, it will be fascinating to watch these implementations play out in the wild.

While on-chain governance is a double-edged sword and comes with significant trade-offs, I’m excited to continue closely watching on-chain governance evolve across the coming years. In particular, I hope to see more experimentation around Futarchy and the potential gains in efficiency speculation markets may bring to governance.

This is Part Three of a Three part series. To read Part One, an intro to Decentralized Voting, click here or Part Two on Voting Trends, click here.