Governance is a key area of exploration for blockchains today. There are typically two layers of governance: off-chain and on-chain. Much has already been written on the trade-offs between on-chain and off-chain governance. This post will not explore the merits of either position, but rather the barriers and potential solutions to increased voter participation generally.

Blockchains require some form of governance to help the community make adjustments or improvements to the network, like changing certain core parameters like the Block Size or adding new capabilities like SegWit which enable scalability improvements like the Lightning Network.

The typical cadence of off-chain governance is as follows. First, a stakeholder (developer, economic actor, etc.) conducts research and develops a formal proposal. Proposal discussion then occurs across social mediums like #CryptoTwitter, online forums, Core Developer meetings, and/or mailing lists. The community, including Core Developers, will review the proposals, provide feedback and decide whether to accept the proposal off-chain. Generally, a significant majority is required to adopt a proposal. Once a proposal is pushed through and widely communicated, node operators will then need to upgrade their software. Proposals are typically batched together for release in a future fork (i.e the Constantinople hard fork included 5 EIPs).

In contrast, on-chain governance activity occurs “on the blockchain”. The major implementations of on-chain governance today feature on-chain voting like Decred’s Politeia, which allows stakeholders to vote on funding for Decred’s treasury, or Tezos’ multi-step amendment process, in which Tezos token holders can vote on protocol-level changes, such as increasing gas limits as proposed in the recent Athens proposal (more on that later).

While unproven, with many prominent critics noting that on-chain voting can lead to plutocracies and oligopolies, the broader trend of on-chain governance is an important narrative to watch as blockchains continue to evolve.

For those interested in reading more about governance, I highly recommend Fred Ehrsam’s “Blockchain Governance: Programming our Future”.

As on-chain governance continues to evolve, there has been momentum with several on-chain votes recently taking place. While the scope of proposals have varying degrees of importance, voter turnout might be extrapolated as a *very general* indicator of community participation within decentralized governance.

The chart below outlines voter turnout represented as a % of circulating token supply for a number of recent proposals. As a rough reference point to the real world, Brexit voter turnout was 72.2%, the average voter turnout for US presidential elections is 50–55% and average U.S. corporate voter turnout historically hovers around 75%. 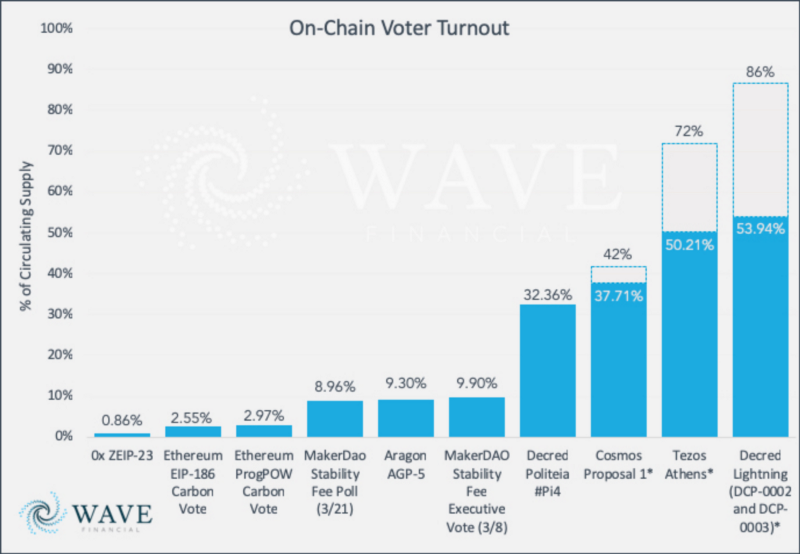 *Including voter abstains, Cosmos, Tezos and Decred voter turnout increase to 42%, 72% and 86% respectively. Big shout out to Foreground Capital for consolidating much of this data.

These data points are by no means comprehensive and there is significant nuance across projects.

Looking a level deeper, if one were to instead measure voter participation by number of wallet addresses vs. % of circulating supply, it is clear that whales (investors with an outsized proportion of total supply) can significantly swing the numbers.

As a concrete example, looking at the number of participating wallets for Aragon’s AGP-5, voter participation decreased significantly from 9.3% represented as a % of circulating supply to 0.12% (25 addresses out of >20k). Quick plug to participate in the next Aragon vote taking place on April 25th!

That being said, the clear standouts of this analysis are the Decred Lightning Network at 86%, the Tezos Athens amendment at 72% and Cosmos’ Proposal 1 at 42% (after accounting for voter abstention).

As Cosmos launched just over 2 weeks ago on March 14th, 2019, a more fair comparison may be isolating for online voting power, which significantly improves Cosmos participation to ~73% in Proposal 1 (which officially ends on April 3rd). Additionally, after adjusting for the Tezos Foundation’s public abstention, the Athens amendment vote had a 72% participation rate as the Tezos Foundation’s baking operations manage a 30% of total “Rolls”.

It’s interesting to note that Decred, Tezos and Cosmos have consciously built on-chain governance into their identity as “self-governing” blockchains, and while these are early data points, it seems the communities are buying into the meme. In addition, all 3 protocols provide voters with a direct incentive to participate via Proof of Stake.

Decred’s ticket system allows voters to earn rewards and secure the network by locking up Decred’s native token, DCR, while coupling the ticket with on-chain voting. With over 45% of the total available supply of DCR participating in Proof of Stake mining, DCR stakeholders can earn roughly 12.5% annually by staking.

Likewise, Cosmos yields are hovering around 11% with a solid participation rate at 46.5%, which is notable given that 20% of the Genesis Supply is currently locked up (Interchain Foundation’s 10% is vesting for 6–12 months, ALL IN BITS’ 10% is subject to a 2 year vesting period).

Tezos’ similarly has a high proportion of total available supply mining via Proof of Stake at 81%, although their staking yield is slightly lower at ~7.4% annually. However, simply looking only at staking yield is only half the picture without taking into account annual inflation rates (potentially a future post).

Click here for Part 2 on why is there such a large delta within on-chain voting and more.